.
As you probably already know, in October this year, the Vatican will be hosting a world synod of bishops to discuss marriage and family issues.  Just days before that  meeting begins, an international group of Catholic supporters of LGBT people will be meeting in Rome, along with representatives of the Waldensian Church and of the civil society, in order to discuss about how to renew the pastoral care with a view of fully including the LGBT people, and same-gender couples and families.

The conference, entitled “The Ways of Love: International Conference for a Pastoral Care with Homosexual and Transsexual People,” will take place on Friday, October 3, 2014, in Rome.   At the close of the conference, an appeal for appropriate pastoral care for LGBT people will be made to the bishops meeting in the synod.

A keynote speaker at the event will be Bishop Geoffrey Robinson, a retired auxiliary bishop from Australia who is the author of the book, Confronting Power and Sex in the Catholic Church.  Bishop Robinson was a featured speaker at New Ways Ministry’s Seventh National Symposium in 2012, where he called for a total re-vamping of the Catholic Church’s teaching on sexuality.

In addition to Bishop Robinson, the other speakers will be:

James Alison, Catholic theologian and priest. Originally from the United Kingdom, he residesin Brazil and has worked extensively on homosexuality and Catholic faith, in particular on Catholic consciousness and gay consciousness;
Antonietta Potente, theologian and Italian Dominican nun based in Bolivia. She will offer a reflection on a new approach of the Gospel to the LGBT people;
Letizia Tomassone, Waldensian pastor, President of the Commission on Faith and Homosexuality of the Baptist, Methodist, and Waldensian Churches in Italy. She will tell about the path that these Churches have undertaken before openly including the LGBT people and couples;
Joseanne Peregin, President of the Christian Life Community in Malta and mother of a homosexual man. She will tell about the feelings and the fears that Catholic parents may have when it comes to homosexual children.

In anticipation of this conference, the website for the meeting has been posting interviews with some of the conference organizers, an international group of people from five continents.   Below is a sampling from some of those interviews, describing the needs of LGBT Catholics and the hopes for the syond.  Clicking on each name will bring you to the page with the entire interview with that person.

“When the PACS (Civil Union bill) was introduced in 1999, the Roman Catholic Church’s reaction was quite hysterical, with demonstrators chanting ‘Les pédés au bûcher!’ (‘Burn the faggots!’). When last year (2013) the present government introduced a law allowing marriage and adoption for same-sex couples, there were once again enormous demonstrations, sometimes violent.

“The archbishops of Paris and Lyon made quite strong public statements, likening homosexuality to, for example, zoophilia. Since the law has been enacted, the climate has become quieter and rumours are going around that a large number of the bishops regret the excessive language of last year.

“Even so, the bishop of Bayonne, earlier this year, went to Russia to congratulate Putin on his energetic persecution of homosexuals. On the other hand, two or three bishops have made definite attempts to set up some dialogue with homosexual groups and there is also some contact with influential theologians.”

“I think this synod is a great opportunity for bishops to discuss LGBT people, relationships, and families. It is the first time the bishops are covering the topics of marriage and family in a synod since the question of legal marriages for gay and lesbian couples has become a reality. Many bishops from around the world have already publicly acknowledged that most Catholics do not accept the moral condemnation of loving, committed lesbian and gay relationships.

“If these bishops are honest, I think they will realize that this rejection of the church’s teaching is not because people don’t understand it, but because Catholics of good faith have reflected prayerfully on their experiences of lesbian and gay people and couples and have witnessed something holy in their lives and commitment.

“It’s also the first synod under Pope Francis. I think the bishops know that people around the world have responded positively to Francis’ new, welcoming approach to LGBT people. I think they will realize that any negative statements from the synod about lesbian and gay couples will alienate a great number of Catholics in the pews.”

“Pointing out new ways where the ecclesial communities and homosexuals can meet and discover a new meaning for the announcement of the Gospel is what is needed. The idea is to follow in Abram’s footsteps, who wasn’t defeated by fear, who didn’t stand still in Harran where his father took him, who didn’t want to know in advance where the Lord was taking him, who didn’t ask for reassurance but only God’s promise to keep him under His blessing. (Gen. 12:1, 2).

“Homosexuals’ experience is deeply connected to Abram’s vocation: just like him, they need to face a horizon they don’t know, go down a road of which the final destination is unknown and the challenge of turning their homosexuality into sanctity without role models or points of reference. Just as happened to Abram, they will hear their old friends ask: ‘Why are you doing this? Live your life and give up unrealistic ambitions. Don’t walk roads you are not familiar with.

“But just as Abram did, they will hear God’s promise echo in their hearts: it is absurd to human reasoning (‘I will make you into a great Nation’, the Lord said to him when he was seventy-five and with no children because of his wife’s barreness) and it is demanding (‘Go from your country, your people and your father’s household’). This promise, apart from His blessing (‘I will bless you’), has no warranty (‘Go to the land I will show you’). There is only an undefined destination that the Lord will point out on the way. Yet it is God’s promise.”

The conference is sponsored by the European Forum of LGBT Christian Groups and financially supported by the Ministry of Education, Science and Culture of the Netherlands.  It will be held at the Waldensian Faculty of Theology, Rome. 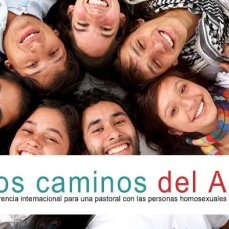