Dear Friends, We are delighted to invite you to the international theological conference The Ways of Love: for Pastoral Care with homosexual and trans people which will take place on 3 October 2014 in Rome. We especially welcome every person, organization, clergy and religious affiliated committed to the inclusion of the homosexual and transgender persons in the Christian churches. The conference was conceived to help the extraordinary Synod of Catholic Bishops on Family starting from 4 October not to forget the homo and transgender individuals and families.

The answers to the questionnaire spread throughout the Catholic dioceses have highlighted the need to expand the reflections made by several theologians starting from the 1980s’ and to rethink on a larger scale the involvement of the LGBT community successfully experienced in local churches.
On the other hand, this need was implicitly recognized by the Synod Secretary-General who said “A lot of suffering, above all, of those who feel excluded or left aside by the Church because their lifestyle does not correspond to its doctrine and to its discipline” (The Roman Observer, 21 February 2014).

The conference will offer ideas developed from the Catholic theological thinking and from the pastoral care of the other Christian churches. The conference will also include the testimonies of homosexual and transgender persons who still feel integral part of the People of God and live their faith with commitment.
Panelists will be: Mgr Geoffrey Robinson, Australian emeritus Bishop; Sr Antonietta Potente, Italian-Bolivian theologian and Dominican nun; James Alison, British theologian; Ps Letizia Tomassone, President of the joint Baptist-Methodist-Waldensian Commission on Faith and Homosexuality; Mrs Joseanne Peregin, President of Christian Life Community in Malta and herself mother of gay child.

There will be important testimonies of Italian homo and transgender people who feel as a core part of the People of God. They keep living their faith with commitment. A group of them have drafted an appeal for the Synod, which will be launched at the end of the conference. We ask everyone, as individual or as group or association to express their public support tothe conference by sending an e-mail to the official e-mail address of the Steering Committee lestradedellamore@gmail.com

The conference is sponsored by the European Forum of LGBT Christian Groups and financially supported by the Ministry of Education, Science and Culture of the Netherlands
. 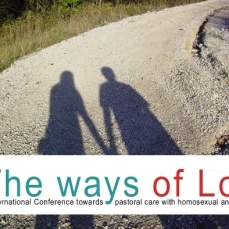